Chaos Base Round 32mm X4 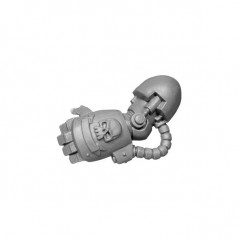 Back with Fur Cape Head with Helmet A